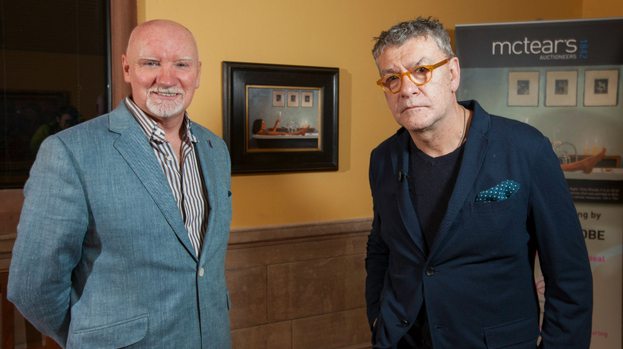 Sir Tom Hunter has donated a painting by Jack Vettriano so that it may be auctioned to raise funds for the STV Appeal 2013.

Entitled Night-Time Rituals II, the painting was acquired by Sir Tom at a charity fund-raising dinner last year and the Scottish philanthropist has re-donated it for an on-line auction to raise funds for the STV Appeal, an annual fund-raising initiative launched in 2011 by STV and The Hunter Foundation to help children and young people affected by poverty in Scotland.

Night-time Rituals II will be on display at Kelvingrove Art Gallery and Museum in Glasgow from 1st September to 11th October 2013.

The sale of Night-time Rituals II is being handled by Glasgow based auction house, McTears, via their on-line bidding platform Gallery 1842. Bidding started on-line on Sunday 1st September and ends during the live STV Appeal show on Friday 11th October.

Jack Vettriano has given his support to the re-gifted donation and comments:”I applaud Sir Tom’s generous decision to donate the painting that he acquired last year and would encourage any potential bidders to follow his example by bidding as generously as they can in the knowledge all funds will go to the STV Appeal, which was set up to address a hugely important issue for Scotland.

I was shocked to hear the statistic that 220,000 children in Scotland are living in poverty and I am pleased to have been able to make a contribution to the STV Appeal and to give my on-going support to this fund-raising initiative. Night-time Rituals, explores a theme to which I like to return from time to time – it’s about creating an atmosphere of anticipation and indulging in those rare moments where all your senses collide.”